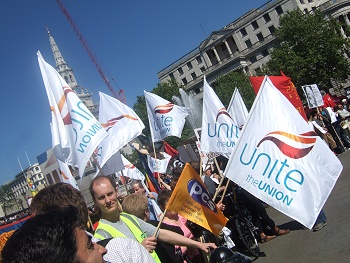 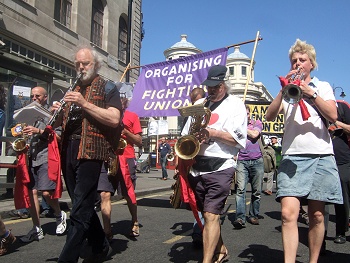 A pretty jolly atmosphere, helped along a lot by the weather and occasional bursts of music. 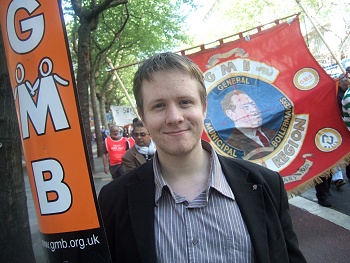 Bloggers on the march – Kris spotted with GMB colleagues.

Fraternal greetings to all bloggers and/or unionists! Had a nice stroll this afternoon for the traditional May Day march in Central London – A perfect day, and good turnout considering it’s not a bank holiday any more – one organiser I talked to guessed “four, five thousand, maybe even more”.

This year it seemed that the international ex-pat communist parties and anarchist blocs had nearly caught the trades unionists in terms of numbers. Certainly in terms of visibility – often fifty people in the same uniform, with flags displaying a pick and mix of Marx, Engels, Lenin, Homegrown communists, and even in one case Stalin.

Quite a lot of day-glo bobbies lining the route, and all very cheerful – presumably happy they drew the straw for the trad march, rather than being sent womble-spotting in the City.

Things aren’t so cheery around the world today though. May Day should be a celebration of the gains made by the struggles of the workers movement, but in other places the struggle is still very much in full swing.

In Turkey 600 people have been arrested after police broke up a labour movement demonstration with tear gas and truncheons. The demo to mark the anniversary of 1977’s “Bloody May Day” came at a time of heightened tensions after te disputed presidential elections.

In Macau, China, there were violent clashes between police and a union march organised to protest at the lack of local jobs after employers illegally brought in many workers from other areas of the country.

And in Iran, union leader Mahmood Salehi is still in jail, after being arrested for his role in organising a May Day rally in 2004. He was tricked into coming to an official meeting to discuss this year’s celebrations, but was instead arrested, held without necessary medical treatment, and sentenced to one year in jail and three years’ suspended sentence. If you haven’t done so yet, then you can send a protest email at LabourStart.org

So greetings to UK unionists, and solidarity with our brothers and sisters who would like the chance like us to take a walk in the sunshine and hold their banners high.