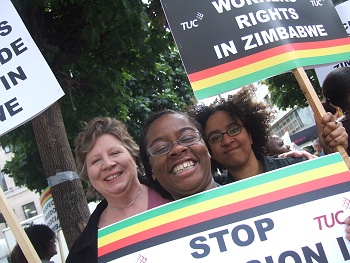 A lunchtime spent in the company of union colleagues from TUC, ATL, NASUWT, PCS, Unite and the ZCTU, ACTSA supporters and Zimbabwean expats outside Zimbabwe House on the Strand, protesting in support of the ZCTU’s 2 day stay away from work. 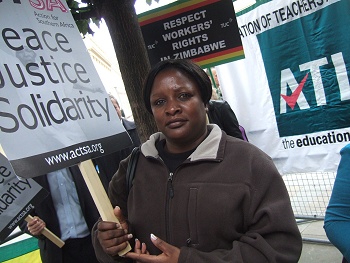 The ZCTU’s Thoko Siwela was there too, visiting the UK with ACTSA, and to speak to the TUC annual Congres about the situation in Zimbabwe (you can see her speech here). 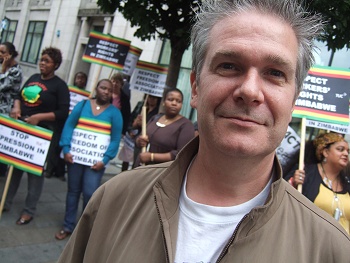 Always nice to meet a proper South London blogger, and they don’t come much more proper than Richard Baggage-Reclaim, who popped by for a bit. 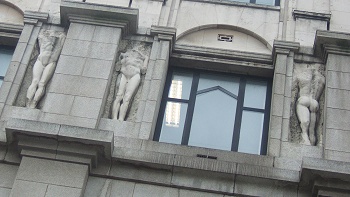 In a gloomy metaphor with the situation back home, the statues ringing the upper floors of Zimbabwe House are all headless and wretchedly eroded.

Faced with such monumental suffering in Zimbabwe, events like this sometimes seem a hopeless drop in the ocean, and you question what you’re doing, having what is a pretty pleasant time and then just going back to work and forgetting about it again. I need to keep telling myself the cliché that every little bit helps though. I’m a little cog amongst the band of people who came by today, the mantra goes. They helped turn a cog to get along a reasonable number of journalists, photographers and one broadcast crew. The coverage turns one more notch on the bigger cog that’s already there, loading pressure on from the outside.

Braver people than me, like Thoko and the ZCTU strikers, are putting pressure on from the inside, and things will come to a head at some point – They have to. Maybe tipping Mbeki off his fence into action, or prompting a Zanu-PF internal coup.

I just have to keep spinning my little cog here whenever I’m asked. And compared to what my colleagues in Zimbabwe are doing, that’s not a lot to ask.