A most unexpected burst of sunshine made Saturday’s demo for the NHS into a pretty enjoyable way to spend a few hours. It wasn’t your run-of-the-(trouble-at)-mill union demonstration either – the attendance of a whole bunch of carnival artists really jolted people out of the traditional slump you’re likely to get halfway round a march. It’s hard not to be jolly when you’re walking next to a couple of giant lobsters on stilts. 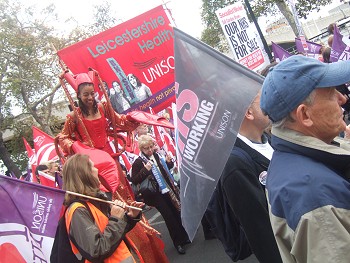 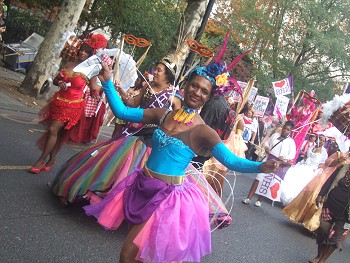 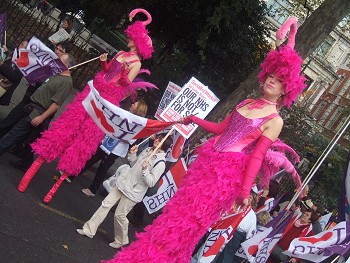 More bands than usual. The usual anarchist drummers – missing their timing occasionally, but hey, they’re anarchists – and stalwart GMB bagpipers (who must wish Virgin Rail did air miles, the amount they turn up for) , were supplemented by a great marching brass band, and the very fun Bollywood Brass Band at the head of the march. 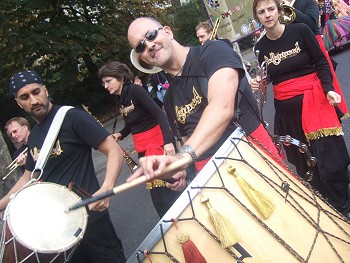 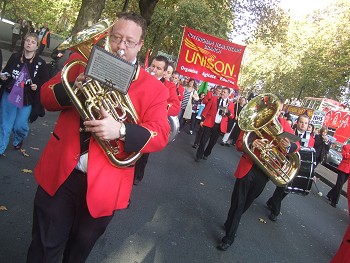 Nice to see a turnout from Respect – the Unity Coalition, whose bloc was located in the front, middle and rear sections 😉 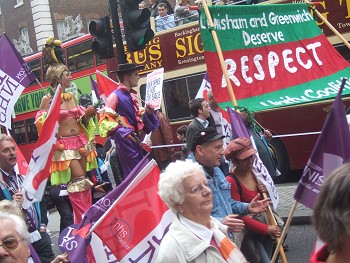 I always bang on about this, but I do like union demos. Unionists are a sociable bunch – put us in isolation too long and we get lonely and disillusioned. Regardless of the cause, and the impact of the demo, a good march is a shared ritual, which gives activists a chance to recharge our batteries, by seeing other people doing unionism in whatever which way they want to do it. 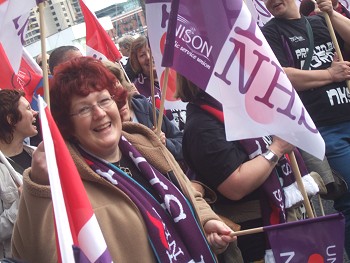 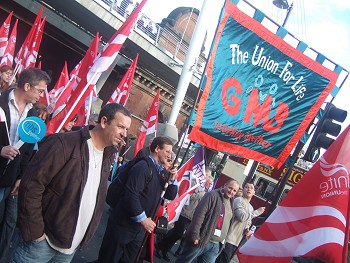 Plus I managed another scalp of a blogger on parade! Omar (he of Omar’s blog, where he has his own post on this), was there with a London Young Labour group. This brings my grand total of bloggers snapped on demos to a whacking great 3! I think I should start some kind of mini-feature like Norm’s profiles and Mars Hill’s questions – that might almost make a point for my blog’s continued existence 😉 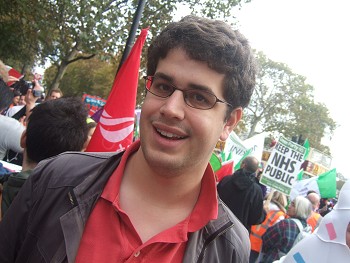 And of course highlight for me was Alabama3, who went down a storm with the (rather depleted) crowd at the end of the rally. A real Glastonbury atmosphere for 10 minutes – They’re one of the catchiest live acts I know, and had no problem getting people going, even after a dozen union, charity and health service speakers. A pity they weren’t on earlier to make the most of a packed square, but I guess people wouldn’t have hung around so long if they had 😉

They have a new album out, and I guess their second song was from it, as I hadn’t heard it before. I feel a trip to the record shop coming on (the number of acts that me & mrs don’t violently disagree on can probably be numbered on one hand, so one of our common faves like the 3 are worth their weight!)