Here’s a video from the unrecognised union at Taiwanese touchscreen supplier Young Fast Optoelectonics. Their members make the high tech display panels for mobile phones for several companies, including up and coming iPhone rivals HTC.Â And their members allegedly face harassment and sacking for union membership, poor safety and enforced overtime. There are even allegations of child labor at YFO. 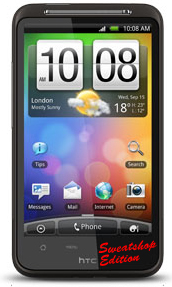 I have a phone using one of these screens, and as it’s due for upgrade and I’m an unreformable smartphone geek, I’ve been looking into the gobsmackingly clever new Desire HD as a replacement for it. I’m concerned though that I really don’t want (another) phone which has been made under such terrible conditions for the people who produced it.

I’ve heard good things of HTC in the past on CSR – even saw one of their managers present a communications industry award to a union strike comms project ferchrissakes. But they don’t seem to be engaging at all over the very serious allegation that the key component of their flagship products is sourced from a sweatshop.

I’ve written to HTC several times, and my enquiry gets passed around and around. They keep telling me they’ve not forgotten it, but they’ve not found anyone who can answer it yet. It seems a bit headless for such a fast moving company.

HTC are such a huge client for YFO that a quiet word from them could make the supplier really change tack. It’s not like YFO can’t afford it. The day after HTC unveiled the new Desire HD handset, YFO were reported as being (thanks to HTC) on track for record profits next quarter. This is a company that looks to be rolling in it, but refusing to spend the small amounts that would make life fundamentally different for their workforce.

As a semi-professional Apple-hater, it pains me to say that after a crappy start to their similar dispute over Foxconn screens – a high pressure supplier, where increasing numbers of workers were being driven to suicide over stress and conditions (performance related bonuses for overstressed and underpaid workers?- way to go Steve Jobs), they look to be improving things slowly, with what looks another round of across-the-board pay rises on the horizon.

If Apple can influence their suppliers (as Steve Jobs said, they were “all over it”) then why can’t HTC match them? Come on HTC – I don’t want an iPhone!