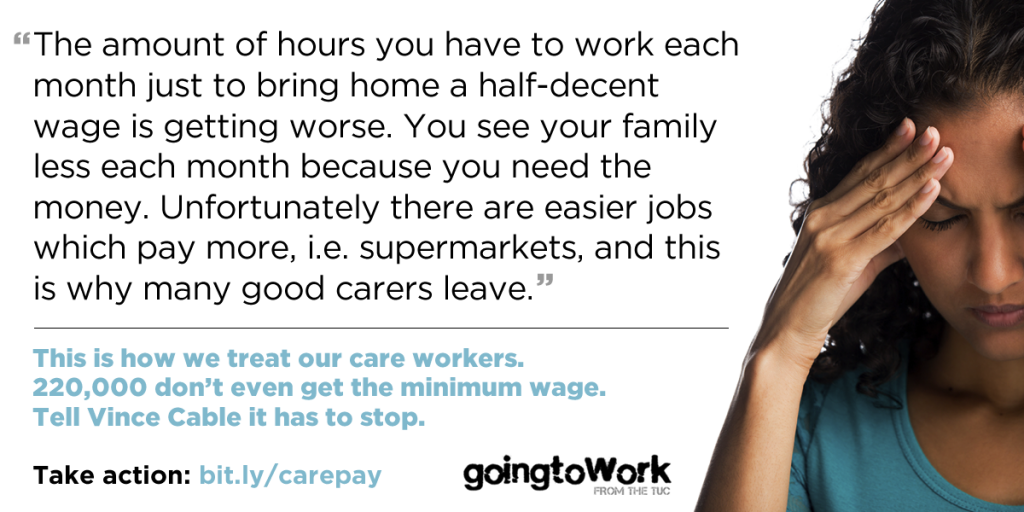 My Dad, who died 18 months back, had home care help in the last years of his illness. My Mum moved mountains to keep him at home, where he needed to be, but what she achieved simply wouldn’t have been possible without the daily help of agency home care workers.

It really isn’t possible for me to say enough about all of the carers who I met. They were amazing people, doing a really complex job with huge diligence, compassion and enthusiasm. They cared for Dad’s needs in a job that could be physically as well as emotionally demanding. They spotted health concerns and made sure things we wouldn’t have noticed were followed up properly. They took it upon themselves to help smooth out some of the bumps in the healthcare bureaucracy for their clients, in their own time.

But the most remarkable thing is that they managed to maintain this professionalism day in day out, whilst their employer consistently treated them like shit.

Over the time they were visiting Dad, their working conditions went from bad to worse. The company were a national agency, better known as a construction firm. I looked into it and found the company had got into care in a roundabout way. After doing construction for councils, they started taking on building management contracts for those buildings too. Then they noticed local government had an increasing number of outsourcing contracts in other areas – and they saw a healthy profit that could be made by hiring in casualised workers instead and taking a big slice off the cost of their conditions.

Here’s are some of the employer tricks I found out when I was visiting (in between passing round UNISON membership forms):

All these little slices at their terms and conditions just piled up and up. Losing paid hours from a day on a low base rate meant most of them ended up on less than the national minimum wage. Yes, that means they were being illegally badly paid, not just badly paid.

And what’s most annoying is it doesn’t have to be that way, even under the current regime of funding cuts for social care. Carers from another agency helped give Mum a few hours off every week. Their agency was a non-profit, set up to provide social care. The carers got more stability on shifts and a better pay rate (tho still not quite the Living Wage). The agency were commissioned through the council in the same way, and billing the council the same amount per shift. It’s just that they were evidently spending more of the money on the staff who did the work, and taking a lower profit.

There are a few sparse signs that carers are organising themselves. I heard of UNISON recognitions here and there and the GMB also represent many carers, but none of them told me they’d joined in that time. It’s easy to see why it’s so hard to organise. Good care workers are being driven out of the profession every week by the conditions, and the fragmented network of small agencies providing care since the council direct employed teams were outsourced means that there’s a lot of staff churn between agencies. Plus of course when you’re on poverty wages, with no income security from week to week, even lowest tier union fees are a big hurdle.

But there’s one quick win that might help to turn the tide a little. HMRC used to inspect the care sector, and brought cases against many agencies, helping to keep lots of the others a little more honest. This has now stopped, and it needs to be brought back again as things are getting worse. There are big name companies and small agencies alike that could be clobbered for systemic non-payment, but that are going unpunished for the lack of ministerial direction.

UNISON are petitioning Vince Cable to give that direction and restart HMRC inspections for non-payment of the minimum wage in the care sector. Please sign it!

This one is personal for me. I can put names and faces to each of these abuses and I owe them all a huge debt for the difference they made to my family. Please do take just a minute to sign up and help UNISON do something more about this and bring a small degree of stability to the sector and to many good people’s lives. I’d really appreciate it!

PS: For the story from the sharper side, this piece by a care worker tells it in her own words.