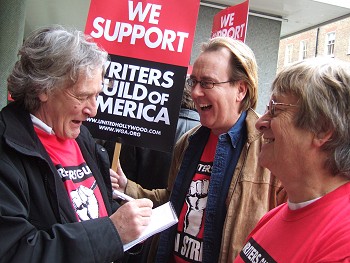 Writers’ Guild of Great Britain members (though outnumbered in this pic 2:1 by NUJ members) were out in force yesterday, to mark an international day of solidarity with the striking screenwriters of the Writers’ Guild of America. I managed to pop by for the end of it, after an exciting (no, really) team away day morning a few streets over.

Nice atmosphere, with lots of people meeting friends and chatting. I think with such an atomised workforce, writers should really have demos every other week, just so the freelancers can meet other humans more often.

Call me trite, but if they’re the Writers’ Guild, couldn’t they have come up with a cleverer slogan than “We Support Writers Guild of America”? That sounds more like the work of the Chief Subs’ Guild of Great Britain to me 😉

Anyway, a very worthy cause, with a surprisingly decent turnout for the tail end of a demo (can’t comment how many were there whilst the main demo was going on, as I was so late, but it looked good on YouTube – I missed the slebs too) and nice to see our Transatlantic comrades’ campaign getting a bit of solidarity yesterday, all around the world.

I was busy looking for bloggers for my ‘bloggers on parade‘ obsession, but didn’t notice any of the usual suspects, so presumed it a blog-free zone. Until, that is, I got back to my computer to look out some of the other coverage of the event and found this from James Moran and this from Piers Beckley, which nicely matches with this (spotted lurking on the left): 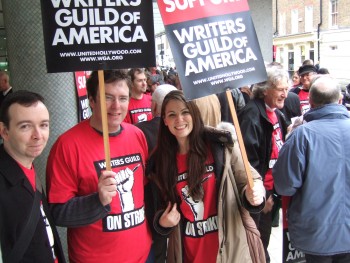 Should have known that any group of wordsmiths will be 66.6% composed of bloggers! So that’s two more sightings in the wild and, happily, two more nice blogs I didn’t know about to check out more often 🙂

And thanks especially to Piers for the very fun suggestion that we send those naughty Hollywood cap-it-er-lists a box of pencils, to stand in for all the pencils that have been downed until the writers get a fair deal. I’ve added my 2B worth to the campaign, and passed on a boxful of sustainably forested scribble sticks to one of the six men who control the six media conglomerates. $1 well invested there – Let’s see how well they do at writing until their staff get back!

One thought on “Write on!”