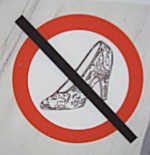 Can anyone tell it’s the silly season? 2 days running now, the papers have been having fun with a story on how TUC killjoys would like to ban stiletto heels. It started in the Mail, and whilst I’d not expect them to let facts get in the way of a handcart firmly on it’s way to hell, it’s a little disappointing to see every paper (okay, bar the Morning Star) following their lead without checking either.

As I don’t imagine many people who read this are avid Mail subscribers, I thought I’d do them the favour of posting the article here. Hope you don’t mind if I put in a parallel pedant’s guide for those easily troubled by facts…

High-heeled shoes should be banned from the workplace because they are sexist and pose a health and safety hazard, say union bosses.The predominantly male Trade Union Congress has proposed a motion decrying the stiletto heel as demeaning to women.

Hard to tell by which measure they’re suggesting the TUC is predominantly male. According to my TUC Directory (admittedly a year out of date, maybe all the women resigned since or something), 55.26% of trades unionists affiliated to the TUC are male – does that count as predominant?

Of course, it’s not actually the TUC who proposing this idea, but the Society of Chiropodists and Podiatrists. Might that be the same SCP with 72.5% female membership, 75.86% female staff, and one Joanna Brown as Chief Exec?

Members insisted that female workers should sport ‘sensible shoes’ no more than an inch high to avoid injuries and long-term foot and back problems.

They claim that while heels might be vaunted on the catwalk, many women feel compelled to totter around in vertiginous shoes to do high-powered jobs.

Members haven’t ‘insisted’ anything exactly, as the motion hasn’t yet passed, but it’s not inconceivable that something may be insisted by members in the future, through the act of voting in September. Shame it won’t be this that gets insisted though. The motion is not that women should wear sensible shoes, but that they should have the option of wearing them.

Some women may indeed feel compelled to totter around. The motion specifically deals with women who *are* compelled to do this. Some classy retailers and city firms actually specify heels in the dress policy, which isn’t great if people are on their feet all day.

But high-flying women said the motion was patronising. Former Apprentice winner Michelle Dewberry said: ‘This is absolutely ridiculous and I think these union officials should be spending their time dealing with more important issues.

Again, I refer the Mail to the fact that the motion is from the Society of Chiropodists and Podiatrists – the clue is in the name. As such, it might not be too radical to suggest that people having their feet done in against their will *is* considered a rather important area for their members.

‘I’m at work in five-inch heels and perfectly able to do my job. Heels are sexy, they boost your confidence and they are empowering to women.’

Miss Dewberry, who gave up her £100,000 a year job with Sir Alan Sugar and has founded the beauty website chiconomise.com, said: ‘I can’t imagine these officials debating a motion about how tightly men should wear their ties. Wearing heels is a personal choice.’

I’m very glad that glamming up in the office makes Miss Dewberry feel empowered. Is she suggesting such pointy empowerment should be mandatory though, even for women who might be perfectly happy with other means of empowering themselves that don’t involve flaunting certain of their assets? If so, I’m not sure how this squares with her enthusiasm for ‘personal choice’.

And whilst I’m getting petty, it’s true a number of ‘officials’ will be on the conference floor debating this as delegates, but so will a large number of lay delegates from their unions – ordinary people who aren’t ‘humourless union bureaucrats’.

Oh, and unions do have a go at ties too occasionally. Just that the number of people throttled every year by neckware is probably a bit lower than those who get their feet wrecked for them in heels.

Tory MP Nadine Dorries said the extra height can help women in the workplace. She added: ‘I’m 5ft 3in need every inch of my Christian Louboutin heels to look my male colleagues in the eye. If high heels were banned in Westminster, no one would be able to find me.

Actually, here Nadine Dorries has come close to making a convincing case for an outright ban…

‘The TUC need to get real, stop using overtly sexist tactics by discussing women’s stilettos to divert attention away from Labour chaos.’

Much as Nadine might not be able to tell the difference between anyone to the left of Ken Clarke, the TUC doesn’t actually have a responsibility to spend all its time discussing the Labour Party, being as the TUC don’t actually affiliate to Labour. Congress is a forum for people to improve their working lives. Motions to that end aren’t exactly intended as a diversion, they’re what the event is about.

At next month’s annual conference, members will debate the motion: ‘Congress believes high heels may look glamorous on the Hollywood catwalks but are completely inappropriate for the day-today working environment.’

TUC officials have in the past condemned high heels as ‘blatantly sexist’ and the latest motion highlights their effects on women’s health.

They may have done, but I can’t find any mention of it. I can find one of Brendan Barber saying that policies requiring high heels are ‘blatantly sexist’. Bit of a different thing I acknowledge, but will that do for the Mail?

And here I hand over to the Mail for a few paragraphs that are pretty good (mainly because they’re directly lifted from the motion):

Union chiefs warned that women who work for airlines, City banks and West End department stores are forced to wear high heels, even though they are unsuitable.

The motion adds: ‘Feet bear the brunt of daily life, and for many workers prolonged standing, badly fitted footwear, and in particular high heels can be a hazard. Around two million days a year are lost through sickness as a result of lower limb disorders.

‘Wearing high heels can cause long-term foot problems, such as blisters, corns and calluses, and also serious foot, knee and back pain. More needs to be done to raise awareness of this problem.’

It has even published a safety in heels guide for employers declaring: ‘Heels should have a broad base and be no higher than 4cm (1.5 in) … if worn for long stretches no higher than 2cm (0.8 inch).’

Oh no! I thought things were going too well. Yes, a TUC report from last year does indeed ‘declare’ this. It declares it however in regard to choosing suitable *safety footwear*. Hands up, I don’t spend a lot of time in women’s shoe shops, but I don’t imagine there’s a huge market for stiletto heels and steel toecaps on the same shoe.

Anyways, now the cat is out of the shoe box, and everyone’s gone heel-crazy. Those staunch defenders of women’s rights, The Sun, even have a petition up today, to decry this attempt to force all the nation’s fashionistas into steel-toed safety boots (although isn’t including a Mr/Ms tickbox on “My right to wear stilettos” political correctness gone mad or something?).

Whilst Nadine Dorries can always be counted on for an outraged quote before she’s read something, I’d expect a little more from the sainted Konnie Huq, who exclaims in support of the Sun’s petition:

SURELY people have the right to choose when it comes to clothing in the workplace, then put up with the consequences of their decisions.

UPDATE 7/8/9: More on this from Nicola at ToUChstone, and Jenni Russell on CiF complains about the joyless utilitarianism of a health and safety motion. Apparently safety’s just too much “to die of” and not enough “to die for” or something…

4 thoughts on “Et tu Konnie? The stilettos go in”